The former deputy of the NSW State Emergency Service says the government's plan to raise the Warragamba Dam wall is “flawed,” warning it could encourage development in floodplains that will remain vulnerable to a catastrophic flood

Chas Keys, the former deputy director general of the NSW SES, said the controversial plan to raise the dam wall would have a destructive effect on the environment and “exacerbate the problems created by severe flooding”. 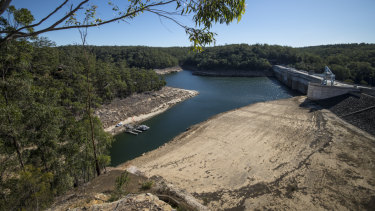 Views of Warragamba Dam, which the NSW government wants to raise by at least 14 metres.CREDIT:WOLTER PEETERS

In a submission to the NSW Parliament inquiry into the plan to raise the dam by up to 14 metres, Dr Keys said the move could create "a climate that will facilitate further urban development" in an area that wouldn't be protected during a major flood.

“The proposal to raise the Warragamba Dam wall is flawed on several counts and should not be proceeded with,” Dr Keys said in his submission.

“It promises mitigative benefits but may actually exacerbate the problems created by severe flooding.”

He added that this would in turn place an “additional burden” on the SES as the agency responsible for flood response and rescue.

The plan has attracted criticism from environmental groups, which have argued that upstream world-heritage listed bushland would be irreparably damaged if the extra water was held behind a bigger wall.

The World Heritage Committee in July raised concerns with the plan at a UNESCO meeting in Azerbaijan, noting that raising the dam wall would likely increase the extent and frequency of protected bushland being inundated.

He said the consequences for community safety “should not be underestimated” and warned that if mitigation measures failed, it could prove deadly in the event of a massive flood.

He wrote that "... There may be deaths in large numbers and there will certainly be massive payouts in terms of flood relief and reconstruction.

“We need to recognise the fundamental reality that floods cannot be eliminated and that the community must not be misled into thinking that mitigation will completely solve the problems that floods pose,” he said.

But Minister for Western Sydney Stuart Ayres rejected Dr Keys' argument and said raising the dam wall to stoke development would be "illogical".

"I categorically reject the suggestion that raising the dam wall will increase development beyond what is already permitted," Mr Ayres said.

"The Government has made clear time and time again the current one in 100 planning level would not change in the event of the dam wall being raised."

He added that no final decision had been made.

In it’s own statement to the parliamentary inquiry, the government said insurers had described the flood risk on the Hawkesbury Nepean floodplains as the most significant and unmitigated community flood exposure in Australia.

The statement said while raising the dam would have “very significant community benefits,” the government recognised that “decision-makers must fully understand the potential environmental and social impacts, and how they may be managed, mitigated or offset”.

The inquiry, which is chaired by independent MP Justin Field, will hold a public hearing on November 22. The committee is comprised of Mr Field, a One Nation MP, three coalition MPs and two Labor members.